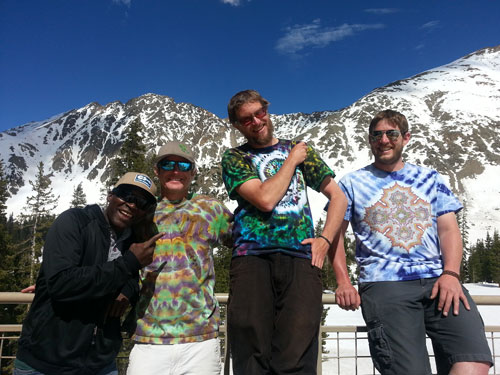 Posted at 19:37h in All Performers by brita

High 5 consists of four members that met in Summit County, Colorado. High 5 was formed when all the members lived together in Montezuma at the old bed and breakfast. Most of the band still lives in Montezuma, but not in the same house anymore. High 5 has been living in the mountains and playing music together for the past 9+ years. The band consists of:

Somewhere in between the majestic altitude of Colorado’s highest peaks and the jubilation of homegrown music, the High 5 has found a synergy that transmutes what may first appear like a traditional, jammin’ performance, into a sensorially heightened experience. The four-piece ensemble co-creates new harmonic atmospheres every time the stage beckons. It’s not just another “jam band.” The High 5 emits prime-form family vibes. Each experience is inspired and musically different from every other show. However, if there’s one thing that never changes, it’s the general feeling of “good times with good friends” that constantly persists throughout each and every High 5 show. The players come from a wide variety of musical backgrounds, which makes for a fresh, well-traveled sound. The influences of bluegrass, reggae, folk, Americana, jam, trance, Afro-Cuban and good old rock and roll combine among the group of artists and are amplified into a full room of sonic wealth. (by: Andrew Harley)