Posted at 06:51h in All Performers by Christy Eller 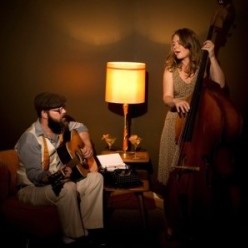 Their music is acoustic and based in the folk tradition yet crosses over into the Americana realm. The songs are catchy and engaging, funny, sad, lonesome and uplifting. Most of the songs are original, but select covers and traditional tunes are part of their repertoire as well.

The band’s 2009, debut release hit the top 40 National Americana charts for several weeks topping off at #25. The cd was the #2 (out of 100) most played on Colorado Radio and one of 5 nominees in the bluegrass category forWestword Magazine’s 2010 Showcase.

Although the cd is acoustic and they perform that way often, Bill and Shelley can also be found playing their songs electrically with percussion and/or electric guitar. Whether acoustic or electric, Honey Don’t will do you good.